STEP’s North America News Digest recently covered the launch of Facebook’s ‘Legacy Contact’ feature. In the past Facebook froze the accounts of deceased persons, however this new option allows users to designate a person who will receive limited posthumous access to their account. This option represents a significant change for one of the most-used online services in history (Facebook had some 1.39 billion users in December 2014) and highlights the growing importance of how online accounts are treated after an accountholder dies. A recent report from the Co-operative’s Funeralcare found that 94 per cent of British adults had online assets but only a quarter of them have plans for these assets after they die. The report also found that 78 per cent of relatives had difficulty managing a deceased loved one’s online assets with 20 per cent of them ‘unable to manage the process at all’. In light of Facebook’s new Legacy Contact feature and the expanding —and often complicated— need to plan for online accounts after death, here are a few starting points practitioners may wish to consider when helping clients take stock of their online accounts.

Facebook Users have several options for how their Facebook account is managed once they die. Should a client wish to have their account permanently removed a representative will need to provide a court document confirming power of attorney, a last will and testament and birth and death certificates. Alternatively a Facebook account can be ‘Memorialised’ allowing others to post on its timeline but the account itself cannot be updated. Finally, as mentioned above, a user can nominate a Legacy Contact to manage parts of the account. The Legacy Contact may be notified at the time they are nominated or by Facebook when it becomes aware of a user’s death. It’s important to note that the Legacy Contact feature is not available in all countries yet, however it has just been introduced in Canada.

Google Google was the first online service to develop a tool to manage accounts for inactive users. The ‘Inactive Account Manager’ feature allows users to designate contacts that can access some features of their Google account after a specified period of time (this also applies to users who simply stop using their Google accounts). A death certificate, full email from the deceased’s Gmail address and proof of legal authority over the estate are required when advising Google that a user has died. 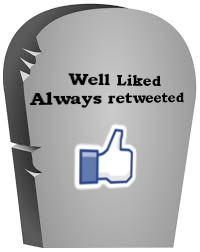 Apple Apple accounts are often directly linked to online purchases of music or films. These digital format assets are deleted with an account, however the Family Sharing feature access to digital assets to up to six other people (this must be done prior to death). Apple devices such as iPhones and iPads are treated differently. By submitting a death certificate and a will specifying that they are being bequeathed to a beneficiary, Apple can deactivate any locks on devices for future use by the new owner. Including the deceased’s Apple ID number will expedite this process as one London man discovered last year.

There is no single way to manage all online or social media accounts once a person is gone. The features put in place by Facebook and Google are comprehensive whereas other platforms depend on the deceased leaving passwords in order to better facilitate access for their loved ones. In the case of Yahoo and its subsidiary sites and assets are not transferable at all, not even to relatives of the deceased. For these reasons, a record of all online accounts, email addresses and their passwords is a valuable starting point and can be included with other important documents for handling by an executor. Practitioners may also find the following articles in the STEP Journal useful when helping clients plan what to do with digital assets: